Yeshivat Hesder Otniel (by its official name: Beit Va’ad LaTorah) was founded with the goal of raising a new generation of Talmidei Chachamim who are connected to the chain of tradition, and who strive to discover Hashem’s message which is revealed in every moment and to every individual.

This goal is achieved through in-depth listening, humility and open-minded discussion. There is also a strong emphasis placed on connecting the Torah being learned to the individual spiritual Avodah of the Talmid and an endless search for Emet.

Brief History of the Yeshiva

The ‘Beit Va’ad Latorah Har Chevron’ was founded in 1987 as a Kollel by a group of Avreichim, mostly alum of Yeshivat Hakotel. Leading the program were HaRav Benni Kalmanson and HaRav Ami Olami. In 1992 the Kollel became a Hesder Yeshiva, and in 1993 HaRav Re’em Hakohen was named as the third Rosh Yeshiva.

On the 24th of Kislev תשנ”ה 1995 HaRav Ami Olami was killed in a terrorist attack. Although the young Yeshiva feared it would be unable to overcome such a devastating tragedy, in fact, the opposite was true; the Yeshiva developed a stronger courage and passion to continue to grow and be a source of true Torah. Not unlike many other cases, this incredible loss, this gaping hole, forged the way for a flourishing and developing program. The student body continued to grow until in תש”ס, 2005 the Yeshiva moved into its permanent and current building which proudly stands as part of the view of the beautiful Chevron hills.

In תשס”ה a Yeshiva high school was opened next door to the Yeshiva – Yeshivat Otniel L’tzeirim – under the leadership of the Roshei Yeshiva. Presently it is led by HaRav Chevron Shilo.

Yeshivat Otniel currently includes approximately 360 students and Avrechim, of them about 100 are serving in the IDF.

Yeshivat Otniel has always been defined by its diversity – be it the students, the Rabbeim or the style of Torah study all of which fuel the atmosphere of the Beit Midrash. First and foremost, this is manifested in the Roshei Yeshiva – HaRav Benny Kalmanzon and HaRav Re’em Hakohen – who each create a unique and complimentary aspect of the Beit Midrash.

Naturally it is challenging to define a spiritual institution in words, therefore, the following are an attempt to describe some topics that are central to the approach and ideology of the Yeshiva:

The Individual vs. the Collective Society:

The talents and aspirations of the individual – as opposed to the community and its needs:

The Torah’s facets are infinite. Every soul is a letter in the Torah and every person has the obligation to uncover and express that unique letter. The duty of the yeshiva is to assist the Talmid and give him the necessary tools too accomplish just that. The type of learning that stems from this recognition becomes dynamic as it understands the various needs of every Talmid. The ability to discover ones pre-designated letter in the Torah, and to transform abstract thoughts in to a part of one’s day-to-day life is what cultivates a deep connection to ones learning.

There is a collective effort in the Yeshiva to make personal Avodat Hashem a part of the communal Avodat Hashem, to cultivate true service of God that does not inhibit ones individual journey and it is the responsibility of the individual to make his service a part of the national narrative. It is with this goal that Otniel wishes to build a Beit Midrash in which the unique letters come together to write the Torah.

This approach, one of diversity and unification, applies to all the branches of Torah study in Otniel; from Gemara B’Iyun where we utilize a variety of Shitot Limud while also encouraging the Talmid to find his own Derech in thee Sugiyah, to the various Limmudei Machshava as portrayed by the wide variety of Shiurim – The philosophies off Chaz”al, Rebbe Nachman, Izbitz, Rav Soloveitchik, Tanya, Rav Kook and more. The Beit Midrash is a refined and prosperous interaction with all of these Shitot and philosophies which blossoms and cultivates the song of the Torah.

“There cannot be a Beit midrash, without Chiddush” wisely states R’ Yehoshua (Chagiga 3a). Contrastingly, R’ Eliezer Ben Hurkenus explains that one who makes a statement he hasn’t previously heard from his Rabbi “distances the Shechina from Yisrael” (Brachot 27b). How can we uphold the balance of preserving Torat Moshe as it is passed through the generations of Chachamim, and the dynamic contemporary thought a Beit Midrash must have?

This tension between the channel of tradition and constant revelation, between our preservation of the sanctity of the Torah and the value of Chiddush, is a cornerstone of our Beit Midrash. We must understand how the Oral Torah takes the concealed spiritual themes of the Torah and applies them to complex worlds and develops halachot. We must also internalize the fact that the Chiddush of every Talmid Chacham was said to Moshe at Har Sinai (Midrashh Vayikra Raba 22). We strive to accomplish this by dissecting the sugiyot first through their primal sources; Psukkim, Midrashei Halacha and Mishna, then examining the Talmud Bavli, Yerushalmi, Geonim, Rishonim and Achronim. This is all while simultaneously interacting with halacha to the most minute details with attention to the spiritual and practical implications of the sugiyah in the modern world.

In Otniel, anything that can be used to aid the Torah study, that does not harm the sanctity of the Torah is welcome in the Beit Midrash; ancient original scripts, literary analysis, computer search engines, lessons in Jewish history, historical and historiosophical analysis, as long these Keilim are ones that deepen the Torah study and not hinder it..

Over time, two parallel schools of thought have emerged with regard to avodat hashem (loosely named) the intellectual approach and the emotional approach. Certain movements have been inclined towards one of the two ideologies and an understanding was formed in which the two philosophies are mutually exclusive. By this perspective, the intellectual emphasis creates a certain level of “dryness” – and emotion, to some extent, minimizes wisdom and truth.

Our belief is that despite their different mannerisms – the intellect and the heart are interlinked and complete one another. By way of this, the thinker discovers new experiences and facets of life while the spiritually inclined crave more learning and development. In our Beit Midrash we try to delve in to both of these God given facets as one, with grace, harmony and synergy.

Talmidim in Yeshiva are given a diverse set of tools to allow them to flourish in various ways; the Yeshiva offers seminars in meditation, creative writing, self-awareness and interpersonal relations which all can promote the development of Keilim in Avodat Hashem.

In Yeshivat Otniel there is a collective belief that there are no “Chutznikim”, rather only Jews, and as previously stated, it is the calling of every Jew to discover their own personal and individual selves, and then how that fits in to the larger Israeli vision. This is why, at Otniel, we try to guide our Overseas students to the fullest extent with a gentle and attentive hand as they find their individual place in the Torah as well as their place in the Yeshiva community.

Yeshivat Otniel tries to encourage freedom of the Talmidim as part of a larger ideology of leadership and ownership over ones own journey. Therefore every Talmid is encouraged to build Independence and the skills to acclimate and achieve anything they desire as the Yeshiva takes shape of the Talmidim in it.

Additionally, Rabbis are always looking to make connections with students and find opportunities to inspire them in addition to the normal Yeshiva framework. There will also be many opportunities for Overseas students to build a network among themselves such as Chutznik dinners, Chutznik Learning Chaburot and Chavrutot and even Tiyulim.

Our Yeshiva sees service in the IDF as an integral part of Avodat Hashem and a public and individual obligation. In accordance with this ideology, students of the Yeshiva serve a “hesder” army service, receiving full combat training which allows them to “serve god with strength” when required, all the while integrating with the larger Israel society.

It is the desire to be influential and involved in the larger Israeli community that leads the Yeshiva to encourage army service, specifically in diversified units consisting of Hesder students and soldiers of the regular track. Many Talmidim join this type of unit, interacting with various facets of the modern Israeli public.

Likewise, Otniel Rabbeim may encourage those of its students who they feel are a good fit, to become a commanding officer within the hesder-officer track. When these students fulfill their duties as a commander in the IDF they return to the confines of the Beit Midrash and continue their Torah growth.

The Path of our Fathers

Because of their particular placement, Yeshivat Otniel and Otniel the Yeshuv constitutes an essential location for the development of Israel, connecting Be’er Sheva to Chevron and Yerushalayim.

The Yeshiva lies upon the footsteps of Avraham and Yitzchak on their way to the Akeida, and the home ground of Otniel ben Knaz who merited reigniting the Torot that were forgotten during the mourning of Moshe (teruma 16). With the help of Hashem, Otniel hopes to be a torch of light and a source of hope for the journey from the Negev to the city of fathers on our way to Yerushalayim.

It is impossible to fully define what happens under the lights of the Beit Midrash. We hope that we succeeded somewhat in portraying a fraction of the aspirations, tensions, complexities, intellectual rigor and spiritual warmth that are what uniquely characterize Yeshivat Beit Va’ad Latorah Otniel. 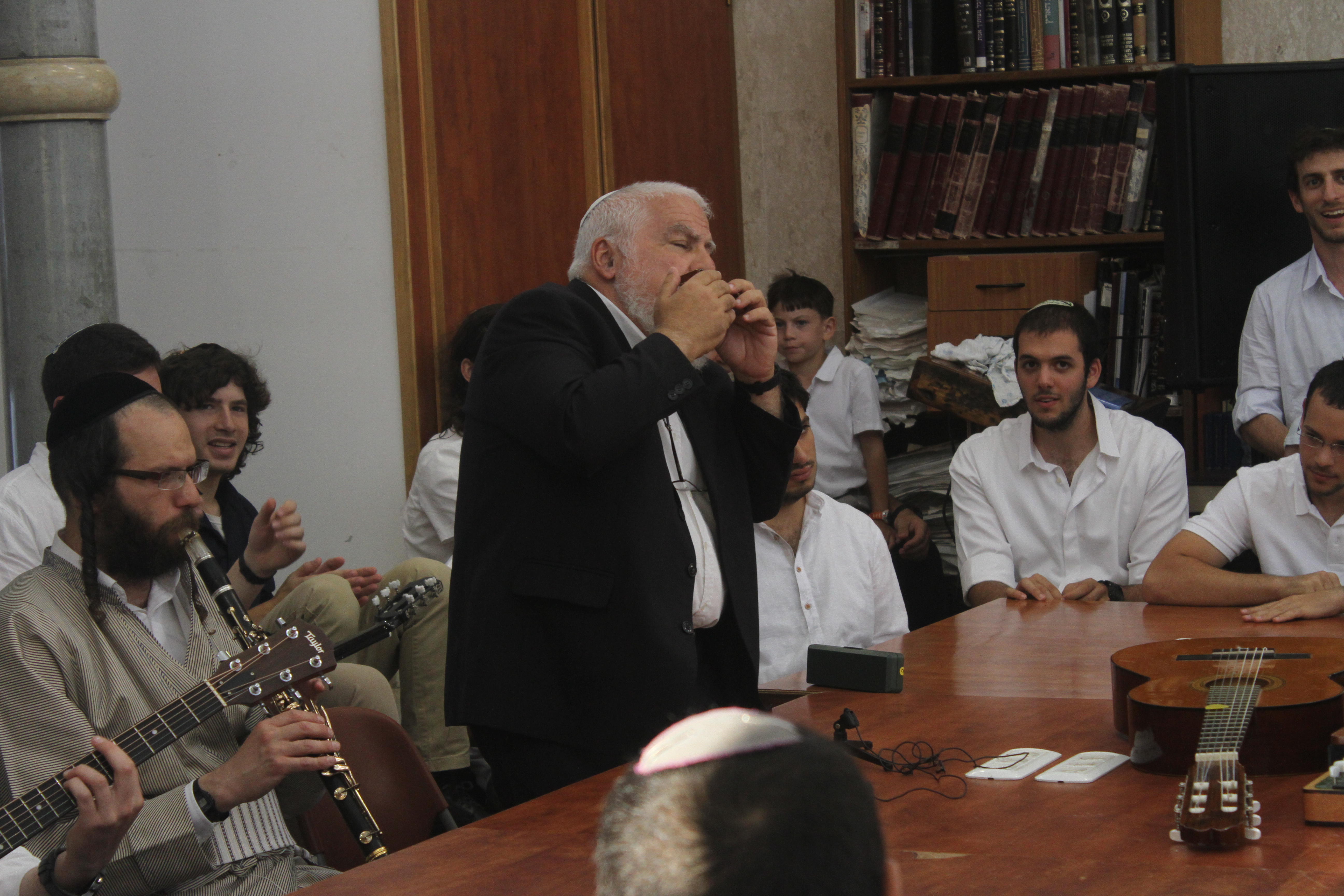 לשיעור
May also interest you

The Soul of the Mishna

As the foundational text of the Oral Torah, the Mishna is analyzed to understand Jewish law and t...