Parshat Chukat: ´Carry a Big Stick but Speak Softly´ 24 ביוני 2014 | Rav Yakov Nagen
We live in an age of spiritual awakening. Drawing on Talmudic, Kabbalistic and Chassidic sources, Rabbi Yakov Nagen explores the existential spiritual questions of our day through the lens of the weekly Torah portion, shining a new light on traditional sources with a refreshing optimism that is a joy to experience.

At long last, the ordeal is drawing to a close. The forty-year decree of wandering in the desert is almost over. One can imagine Moshe’s excitement as the journey of decades approaches its conclusion; one can almost taste the milk and honey…

But Moshe’s dream vanishes once again, this time for good. Parshat Chukat tells of the moment which seals Moshe’s fate: He will die in the desert; he will not to enter the Promised Land.

After Bnei Yisrael complain once more about the lack of water, G-d commands Moshe: “Take your staff and gather the congregation, you and your brother Aaron, and speak to the rock before their eyes, and it will give forth its water, and you will draw water from the rock for them” (Bamidbar 20:8). Instead of speaking to the rock, Moshe hits it, and G-d’s response is harsh and final: “You did not have faith in Me, to sanctify Me before the People of Israel, therefore you will not bring this congregation into the Land” (Ibid. 12). What made Moshe’s sin so great? How could he deserve so harsh a punishment?

According to my friend Rabbi Amnon Dukov, the issue at hand is not a question of sin and punishment, but something much more essential – Moshe’s actions revealed that he was no longer the correct leader for the nation.

Moshe’s staff symbolizes his leadership. It represents power, the ability to shape reality, to conduct it and bend it to his will and the will of G-d. The staff overturned the laws of nature in Egypt and subdued Israel’s enemies in their battles following the Exodus. And indeed, in the beginning of their journey, when the people needed water, G-d told Moshe to take his staff and hit the rock to draw water from it (Shmot 17:6). But now nearly forty years have passed, and a new generation stands at the brink of a new era. This time G-d commands Moshe to speak to the rock. The new command shows a change in direction — leadership based on speaking, and not on miracles and wonders. The rock symbolizes harsh, unresponsive reality. Speaking to it symbolizes the faith that through words, reality can be softened and made to reveal its hidden treasures.

It is not by coincidence that Moshe opts not to speak to the rock. As he himself has said, “I am not a man of words… for I am thick of tongue and heavy of speech” (Shmot 4:10). Moshe admits that he is not one to eloquently express himself; he does not connect to others though speech.

Rabbi Dukov’s insight about “staff leadership” vs. “speaking leadership” points us once again to the duality of “doing” vs. “being,” the difference between achieving a goal by acting on one’s surroundings compared to achieving it through an internal awakening of a person’s own consciousness. While on the journey, traveling through the desert, the mode is “doing,” but as Bnei Yisrael approach their destination, the emphasis shifts to “being.”

It is fascinating to compare the lives of Moshe and the Buddha. The similarity of their upbringings is known – Buddha and Moshe both grew up as princes in a royal palace and eventually turned into spiritual teachers, abandoning their princely upbringing to encounter the pain and suffering in the world outside. But the similarities between them continue, and ultimately bring sharply to light the way in which the two essentially differ.

Buddhism speaks of the “The Four Sights,” a series of four encounters that prince Gautama Siddhartha has on his path to enlightenment, when he left his palace and became the Buddha. In his first encounter he meets an old man, in the second he meets a sick person, and in the third he comes across a corpse. From these encounters he comes to the conclusion that human existence is overflowing with pain and suffering. Then  Siddhartha meets an ascetic and this gives him hope that it is possible to overcome suffering. Thenceforth Siddhartha dedicates his life to sharing this insight with others.

Moshe also experiences four encounters in his leaving of Pharaoh’s palace. Like the first three stories of the Buddha, Moshe encounters three instances of suffering – an Egyptian beating a Hebrew, a Hebrew beating his fellow, and shepherds preventing girls from watering their father’s flock at the well. Unlike Buddha, Moshe takes action in each situation, getting involved to do justice. In the fourth encounter, which parallels Buddha’s meeting the ascetic, G-d reveals Himself to Moshe in the burning bush, again with regard to subject of injustice, and Moshe accepts the mission to return to his people and save them, and dedicates his life to a leadership based on action.[1]

If we examine the story of Moshe’s hitting the rock, it is clear he was not supposed to replace his action-based leadership with speech, rather he was meant to add the level of speech to his already existing leadership. In other words, he needed to combine “being” with “doing,” not switch one out for the other. He was called on to be both the active leader who carries out and accomplishes, as well as to be the mentor who can connect to people on an internal spiritual level. The command to speak to the rock is accompanied by the command to take up the staff, “Take the staff and gather the congregation, you and your brother Aaron, and speak to the rock…and Moshe took the staff from before G-d as He had commanded” (Bamidbar 20:8-9).

In the twilight of his life, Moshe attains this level of completion. We learn this from opening words of the book of Devarim, “these are the words that Moshe spoke to all of Israel” (Devarim 1:1). Moshe spends the last days of his life speaking to the people. Indeed, perhaps it is only after realizing that he will not be able to accompany them into Israel that Moshe realizes the importance of the ability to inspire change through speaking. He will no longer be able to perform wonders for the people, but his words can stay with the

[1] It is worth pointing out that for each of the Buddha’s encounters there is a positive commandment in the Torah – visiting the sick, respecting elders, and burying a meit mitzvah (abandoned corpse). The latter is so important that even the High Priest, on his way to the Beit HaMikdash in order to perform the Yom Kippur service, is commanded to make himself impure in order to bury a corpse, if he encounters one (Rambam, Laws of Mourning 3:8). 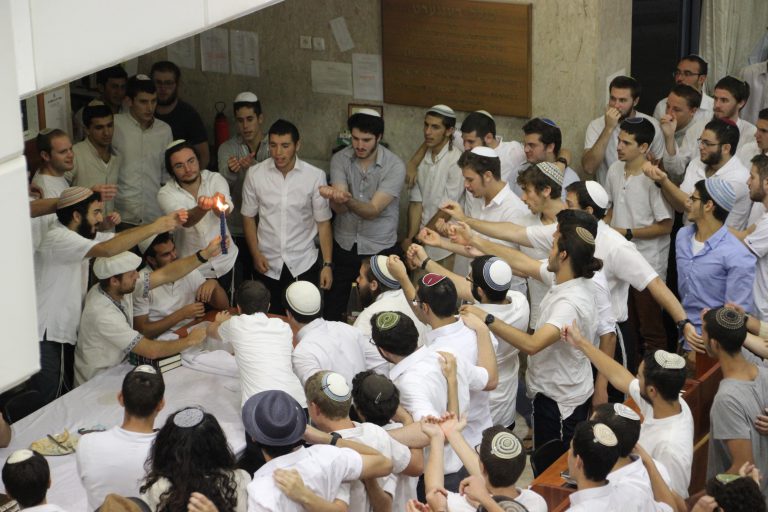